Mani Rimdu Festival is the series of sacred ceremonies and events of empowerment spread over a period of 19 days. This festival is observed from the first day of the tenth month of Tibetian Lunar Calander (following the full-moon in autumn) which falls between October and November as per the English calendar. The sequence of events concludes with three days of public festival. It is celebrated by the Buddhist at Tengboche, Thame and Chiwong Monasteries of Solukhumbu in Nepal to mark the founding of Buddhism by Guru Rinpoche Padmasambhava. Lamas and Sherpas gather at the monastery for five days conducting various tantric processes and prayers to ensure the welfare of the world. Demons are vanquished and the righteous are awarded. Monks in the monastery are adorned in elaborate Buddhist robes and wear wonderfully designed hand-painted masks. 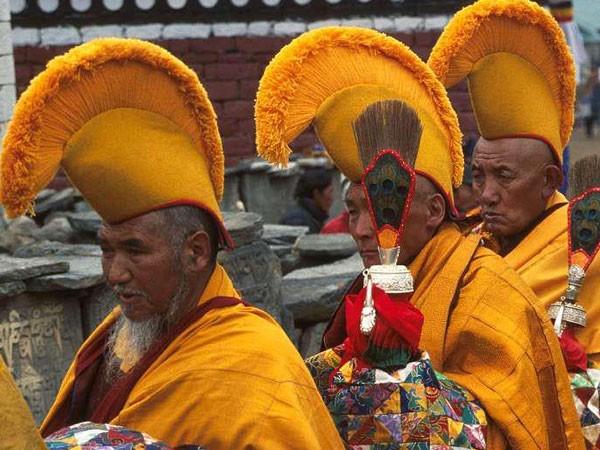 Grand shows are put upon by the monks of the monasteries on three different occasions. Masked dances, Buddhist Dance Dramas and Tantrik rituals are some of the events on display that gather a multitude of crowds from all over Nepal and the world. Many treks are organized to coincide with this festival.

The dates for Mani Rimdu is set with reference to the Tibetan Lunar Calander. The head lama at the Tyangboche Monastery announces the dates for the festival. This year, Mani Rimdu Festival is being celebrated on 12th, 13th and 14th of November in 2020.

Sand Mandala or Dul-Tson-Kyil-Khor is a sacred Tibetan art of sand painting. It is a sacred and most treasured art of Medicine Buddhism. The construction of Mandala is a gradual process of the intricate and painstaking task in which monks place each grain of colored sand in a perfectly designed Mandala layout. Mandalas in Sanskrit means ‘Circle’ and the deeper understanding of the Mandala represents the wholeness and harmony that exists among the hearts of the Tibetan Buddhist Universe.
This particular Mandala symbolizes the palace of Garwang Thoze Chenpo (Lord of the Dance) around which defensive blades are placed to represent deities. The bowl of Rilwu pills (spiritual medicine) is placed above the center of the Mandala. ‘Buddha of Kindness’ is the main idol of the Mani Rimdu. Monks chant the mantra- ‘OM AH HUNG RHI, OM MANI PADME HU’ for thousand of times during the ceremony before the three days public festival. During their meditation, the monks imagine the kindness flowing in the form of Mantras into the Mandala and into Mani Rilwu Pills. Thereby, kindness release out of the Mandala to anyone attending the ceremony.

The Wong is the opening day of public festival and is celebrated on the full-moon day of the tenth month of Tibetan Lunar Calander. The sacred Mani Rilwu (sacred pills) and Tshereel (pills for long life) are given to everyone attending the festival.

The dances take place on the 2nd day of the Mani Rimdu festival. It is a dramatic representation of Buddhist teachings in the form of dances. Symbolic demons are vanquished, chased away or transformed into the protector of Dharma. The main theme of the dance is to fight off negative forces and establish peace. During the dance, the monks are believed to have become divine beings. The dances convey the simplest and the philosophical teachings in the understandable way so that it remains engraved in the minds of on-lookers.

At Ser-Kyum, tea offerings are made to Dharma guards such as Mahakala. It consists of 2 pieces: a smaller raised offering bowl and a larger raised dish-shaped bowl.

The Fire Puja is performed on the yard of the monastery after the dances. Fire Puja is an offering for the Agni (Gods of Fire) and to the gods of Mandalas. The harm is visualized as dissolving into the grain of sand and butter is burnt. Afterward, the sand mandals in the monastery are dismantled and offered to the serpent gods (Nagas).

The next dance represents the Four Protecting Ghings, defending against the demons attacking the Buddhist faith. Colored masks hide the face of the dancers that displays a constant smile. The dancer moves to the beat of the drums and scares children in the audience for fun.
The Dakini dance is performed delicately. Slow-motion dance steps accompanied by the soft tinkle and beats of the bell which are played by five young priests. The dancer is without masks and portrays female spiritual figures; the partners of Padmasambhava. It is believed that they come from the sacred and holiest land of Shangdok Palri and reside in the Mandala. They announce the arrival of Guru Rinpoche at the Mani Ridmu. Two of the Ghings are male and carry cymbals, while two are female and carry drums. The males represent skillful means and females represent wisdom. These two aspects are represented graphically as ‘Torma’- made from barley flour and decorated with colored butter. It starts by symbolizing the body of the deity and by the end of the ceremony, symbolizes the enlightenment itself. It is placed in front of the mandala on its own shrine, at the heart of the temple.