The Great Himalayan Trail | Trek of a Life Time

The Great Himalayan Trail is a route across the Himalayans in Nepal from east to west. The main idea of the Great Himalayan Trail(GHT) is to provide trekkers and hikers the longest and most adventurous trekking experience through the Himalayans from the east end to the west end of Nepal. The total distance from east to west is roughly 1700 kilometers. However, the actual proposed trail is more than 4500 kilometers that expands over Nepal, Pakistan, India, Bhutan, and Tibet, passing over the Greater Himalayan range from Nanga Parbat in Jammu and Kashmir to Namche Barwa in Tibet. Although the cross-country trekking proposal still remains in its infancy, after completion will be the longest and highest alpine hiking track in the world.

The proposed trail links together a range of less explored and pristine landscapes of Nepal’s Mountainous region. The trail crosses both well-known and lesser-known sites of Nepal, mostly inhabited by poorer communities in Nepal. The motive is not only to promote tourism but create an opportunity for inhabitants to advance the socioeconomic benefits of that region. The Great Himalayan Trail covers 16 districts in Nepal, covering Dolpa that connects with Tibetan plateau to Darchula, which borders with India. Among many motives of the Great Himalayan Trail, one is to decentralize trekking tourism that has mostly been centered on Mount Everest, Annapurna region, Solukhumbu, and Langtang region and open doors for many unexplored and pristine trails Nepal has to offer.

The route offers diversified landscapes, flora and fauna, people and culture that add a certain charm to the trail. From fragile high-altitude ecosystem to tropical jungle, from snow leopards to red pandas, from Sherpas to Shamanism to ancient Bon Buddhist culture, the trip comprises different aspects Nepal is famous for and provide unprecedented travel experience from anywhere in the world.

In November of 2014, Nepal and Bhutan had participated in cross-country hikes undertaken with the aid of non-governmental organizations. Passing through the most scenic landscapes in the region that includes mesmerizing valleys, plateaus, and breathtaking landscapes. Nepal has proposed The Great Himalayan Trail has 10 sections consisting of networks of upper and lower routes. Although the upper and lower routes can be roughly mapped out through the existing routes, they may not provide continuous and undisturbed trail.

The upper route passes from east to west of Nepal and through the well-known trekking areas of Kanchenjunga to Makalu Barun, Solukhumbu, Rolwaling Himal, Helambu, Langtang, Ganesh Himal, Manaslu, Annapurna, Dolpa, Rara Lake and Humla and ending on Tibetan border at Hilsa.

In 2012, Gerda Maria Pauler accompanied Temba Bhoti and some porters followed the high route of 1700 kilometers of the Great Himalayan Trail. She helped raise funds for Autism Care Nepal.

In 2014, John Fiddler, Kathleen Egan, and Seth Wolpin cross the proposed high route of the Great Himalayan Trail and became the first team to cross all five technical passes without porter support. They trekked from Taplejug to Hisa in 87 days. Kathleen became the first woman to hike up the high route with no external supports.

Major Attractions and Massifs of the Great Himalayan Trail Nepal 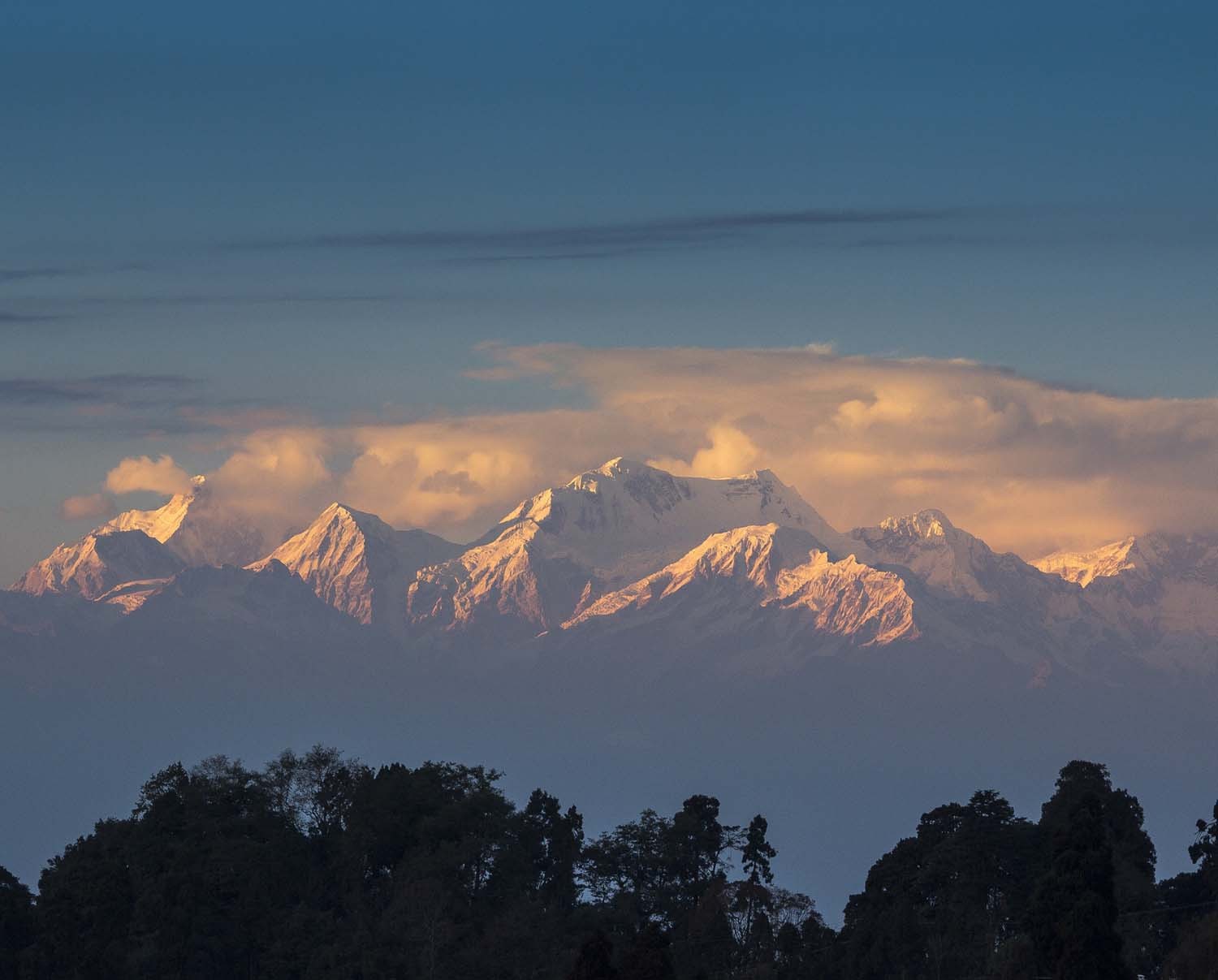 Kanchenjunga is the third highest mountain at 8586 meters, that shares border with Sikkim. Kanchenjunga lies in the easternmost part of Nepal. Eastern Nepal is generally more developed and more prosperous than the western Nepal. This is mostly due to fertile land, auspicious climate and high literacy rate as compared to the western parts of Nepal. Although the rugged terrain even in the eastern part is remote and sparsely inhabited.

This region is named after the Makalu Himal and is the fifth ranking tallest mountain in the world at 8463 meters. It is an abode for more than 3000 species of flowering plants, 25 species of rhododendron and hundreds of species of orchids. 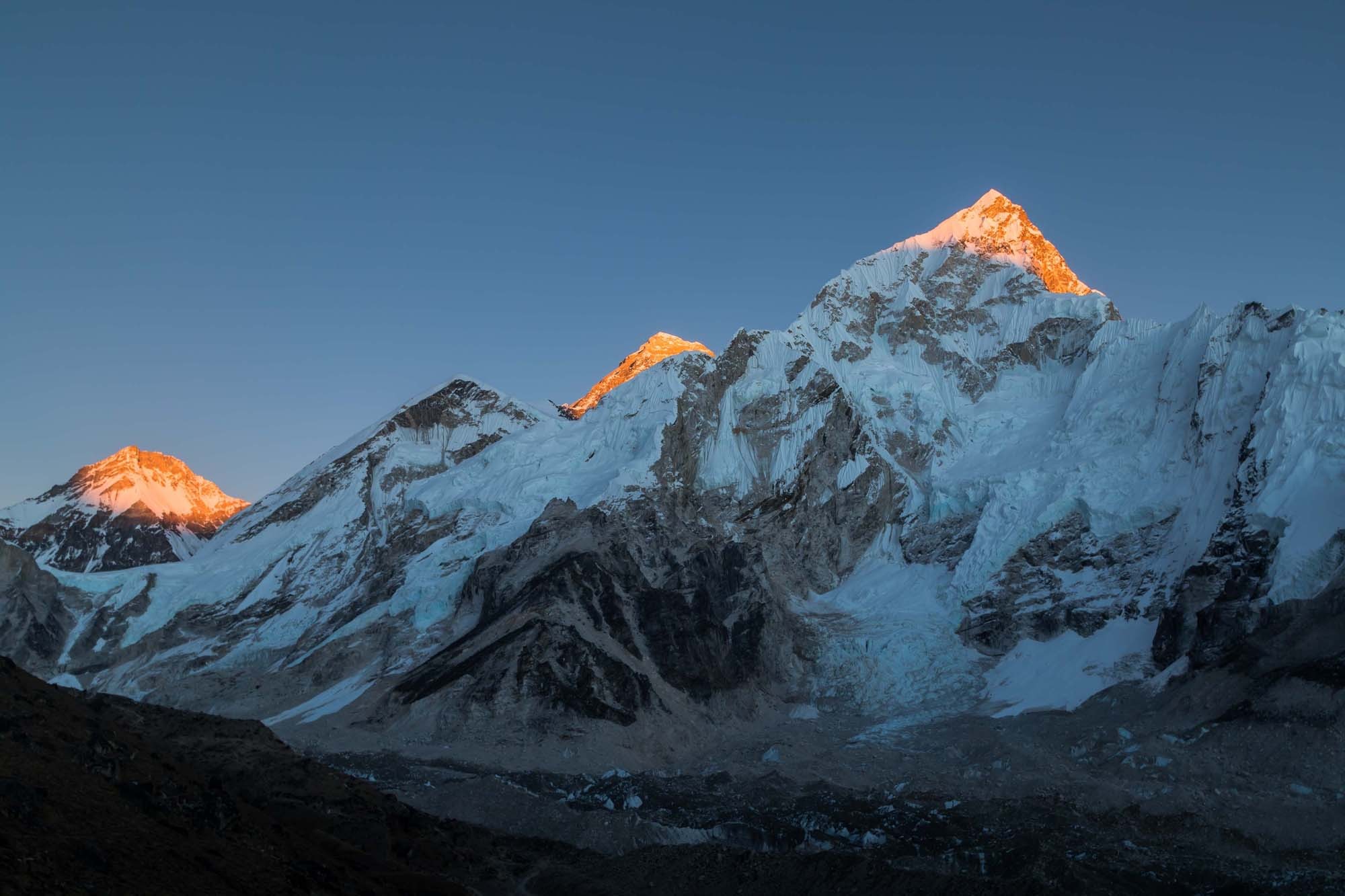 Mount Everest, also known as Sagarmatha and Chomolungma is the tallest mountain in the world standing 8848 meters tall. The Everest region is also known as Khumbu by the locals of that region. It is home to the three highest peaks in the world. Everest being one, Lhotse is the fourth highest standing at 8516 meters and Cho Oyu being the sixth-highest, standing at 8201 meters.

Tamang, Sherpa, Gurungs and indigenous Thami people call Rolwaling Himal home. It has no formally protected areas as it is rich in wildlife including red pandas, black bears, and leopard cats. 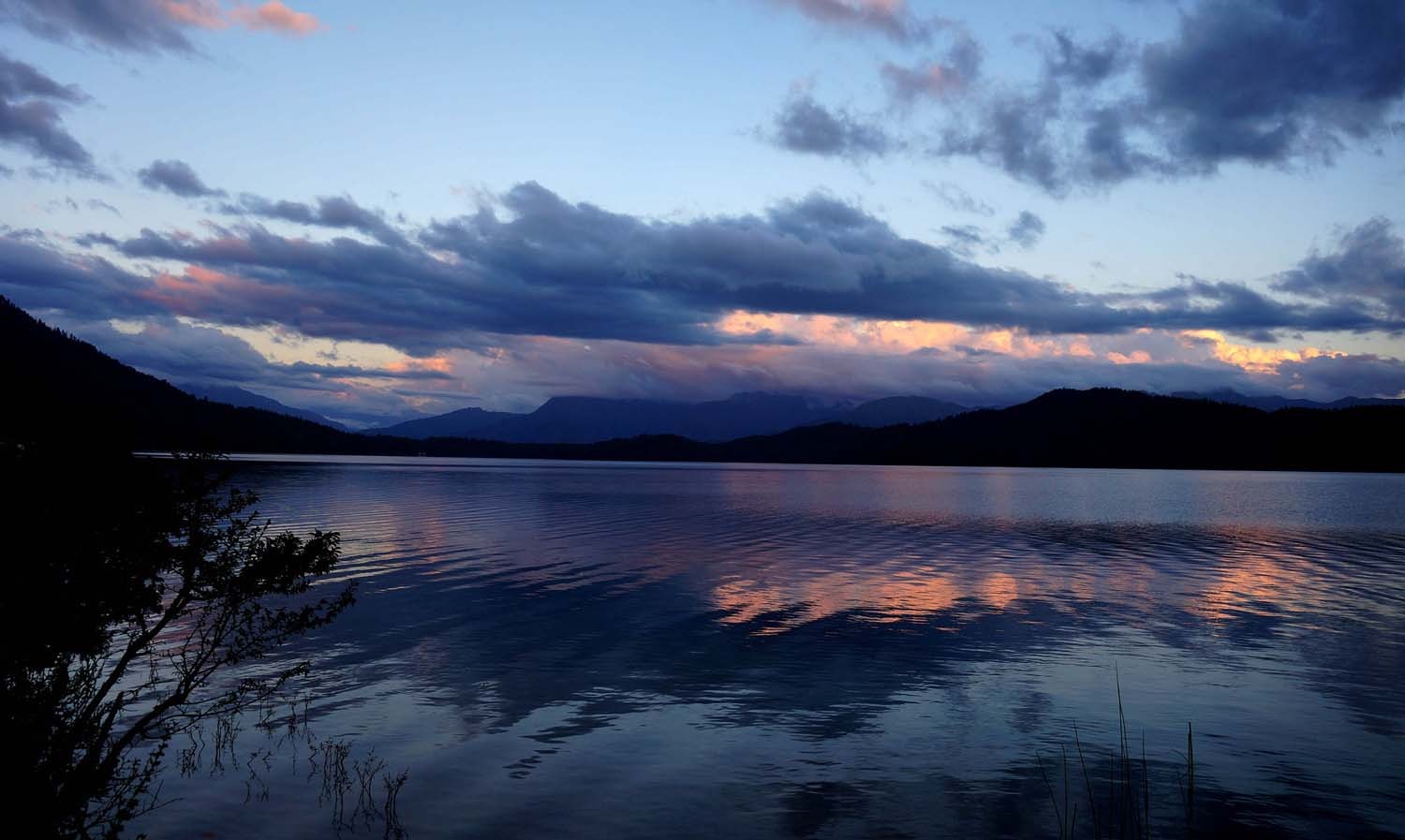 The trail begins from Jumla Bazar and advances to the Mugu district. It takes to days to complete the hike. Jumla Baza is 2300 meters to Nauri-ghat. Danhe Lekh is about 4500 meters high. The terrain is rough and even the most experienced hikers feel the strain. Due to the conditions of the trail, people with altitude sickness are not advised to partake in this trail. From then on, it is a downhill trek to Naurighat. Villages like Bhulbhele can be reached from Naurighat in 7 hours where one can choose to go left to Rara Lake or walk to Gamgadi which is a part of the Mugu district. Both of the trips take approximately 4 hours to complete.

Rara is the largest body of water on Nepal and is the centerpiece of Rara National Park. It is the least visited and protected area with a pristine ecosystem undisturbed by human interventions. The park is itself rich in wildlife including Himalayan Black Bears, Red Pandas, jackals and otters, and the landscape is full of Himalayan cedar full of hundreds of species of birds. 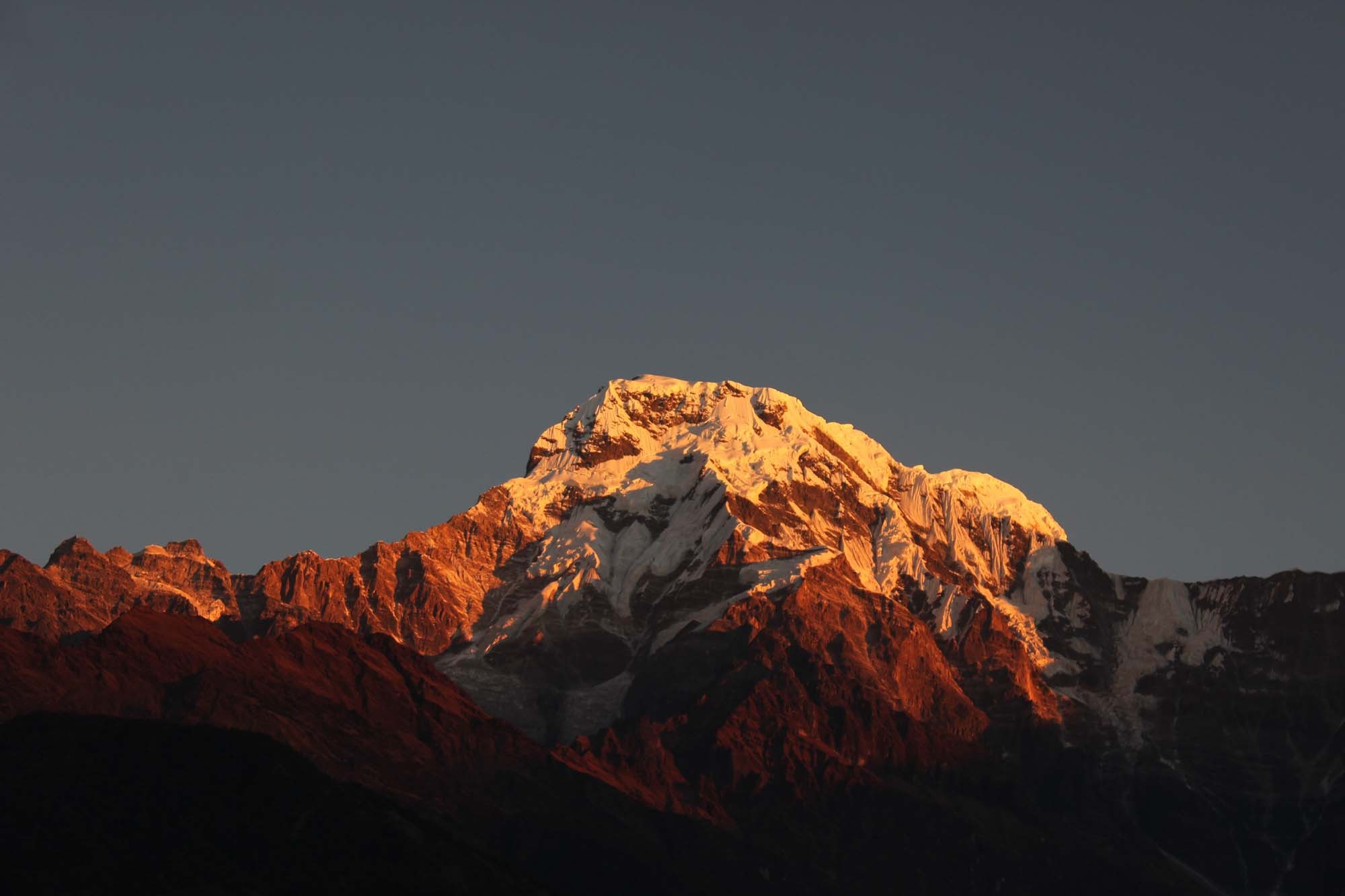 This is a nine-day route that allows hikers to climb from the deep Kali Gandaki Valley on a narrow pathway used by the locals. The track passes through a variety of landscapes full of rhododendron with a wide array of wildlife including tigers and bears and climb Khorpa Ridge for the best view of Annapurna and Dhaulagiri mountain range. There are many community lodges and homestays along the way. 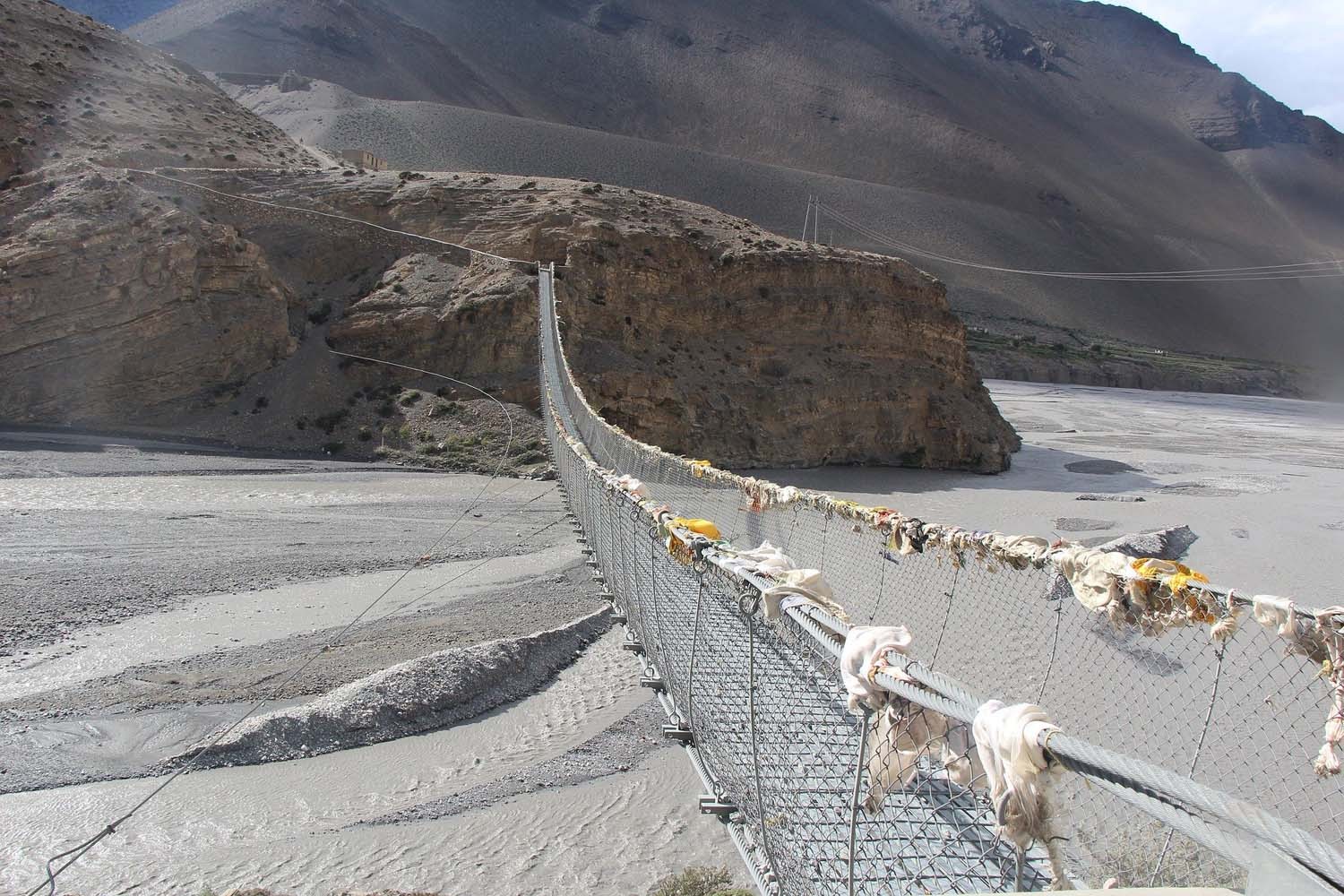 This is a 12-day trek that follows the ancient trade route to the forbidden kingdom of Lo Manthang. One can witness wind-sculpted terrain, past stone villages, Buddhist Gompas, Stupas and cave temples. There are many guesthouses along the way welcoming with steaming cups of Tibetan yak-butter tea. This is a medium level hike suitable for inexperienced hikers. One can easily fly to Jomsom and then hike up to Mustang or follow the trail.

It offers the most beautiful landscapes which were previously unknown to the world. After Eric Valli’s 1999 film- Himalaya, it was popularized all over the world. This region is rarely visited by the trekkers, especially in the spring and summer months. The 2 weeks trek follows through alpine meadows to harsh, high altitude desert of the Tibetan Plateau. One can witness blue jewel- Phoksundo Lake, Nepal’s highest waterfall and two arduous passes more than 5000 meters high. Buddhism dominates this region and pre-Buddhist Bon tradition still prevails. Trekkers can stay at village regulated homestays and visit various Gompas and monasteries. Faunas like Blue Sheep and Snow Leopards are sometimes spotted here.

Routes of the Great Himalayan Trail

The Great Himalayan Trail starts from the north of the Kanchenjunga Base Camp and ends in Hilsa at Nepal’s border with Tibet in the western district of Humla. The trail is over 1700 kilometers and passes through high altitude mountain landscapes and visiting the most remote settlements on earth.

The trail crosses over the altitude of 6146 meters and the whole trek takes over 150 days to complete. Proper gears and equipment are needed and the trekkers must be physically and mentally fit to conquer the Great Himalayan Trail. One can also take guides, porters, and specialists to make the trip a bit easier.

This trail is shorter than the upper trail and it stretches over 1500 kilometers and the whole trip roughly takes over 100 days to complete. The lower route passes through the country’s mid-hills with an altitude of 2000 meters. However, there are many passes to cross with the highest being Jamg La at 4519 meters between Dhorapatan and Dolpa in west Nepal.

Trekking through the lower route passes through forests, pastures, green rice valleys providing the observation of Nepal\s rich culture and civilization. One can also witness varied local settlements with a variety of ethnic groups.

Visit Nepal this year with Shepherd Holidays and witness unstressed and relaxed travel experience. Leave all the planning and worrying to us while you enjoy breathtaking landscapes Nepal has to offer. Amazing travel packages with reasonable prices can be expected. With personalized itinerary tailored as per your needs and preference, traveling has never been so easier. We offer a wide variety of packages including trekking, tour, and many other adventurous activities as per your need. We acknowledge and understand the toll of traveling on nature and therefore encourage all of our staff to practice green tourism. For booking and reservation, you can contact us directly from the website or email us at [email protected]