Nepal is home to many jaw-dropping landscapes, mighty mountains, diverse culture and a multitude of man-made and natural marvels that are enlisted in UNESCO's World Heritage Sites. Out of these 10 world heritage sites, 7 are located in Kathmandu valley and others are spread all over the nation including Lumbini- the birthplace of Lord Buddha, Chitwan National Park and Sagarmatha National Park. These sites are nominated on the basis of their natural and cultural values.

Out of Kathmandu Valley 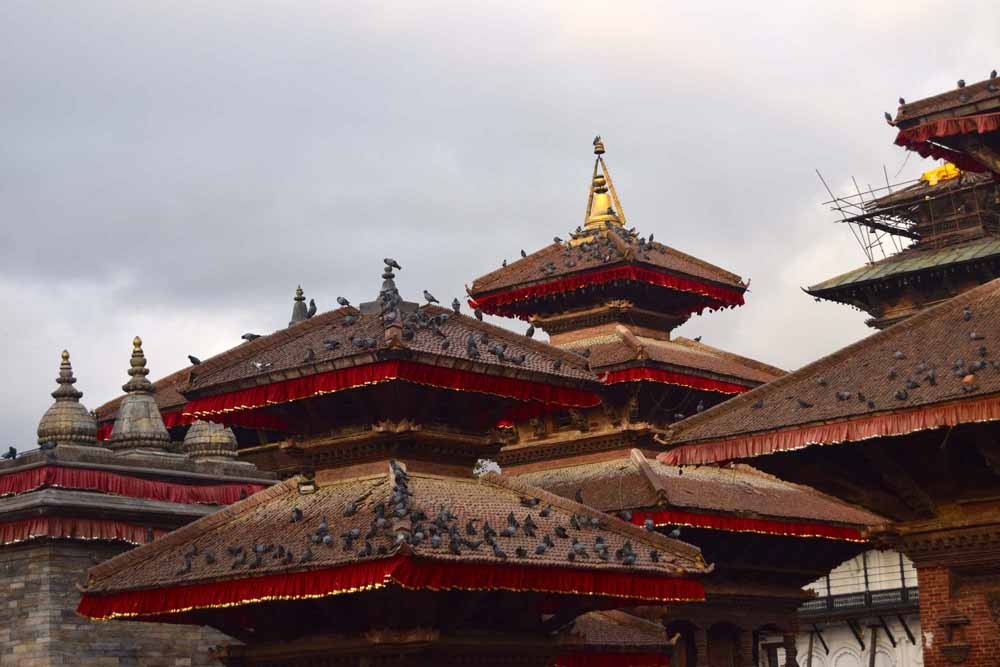 Located in the bustling area of New Road, Kathmandu Durbar Square and its vicinity are ancient as the culture and traditions of Kathmandu, dating back to the regime of the Malla dynasty who ruled over Kathmandu from 10th to 18th century. The shrines and temples around the Durbar square are constructed by the Mallas and later by the Shah dynasty paying homage to the culture and religion. Temples like Degutale Temple, Taleju Temple, shrine of Kaal Bhairav, Mul Chowk, Mohan Chowk, Hanuman Dhoka palace date back centuries. Legends have it, that if anyone who can successfully decipher texts written in 15 different languages on the walls of Hanuman Dokha, there will be instant flooding of milk from the walls. Hanuman Dokha palace was home to the Mallas during their regime and later to Shahs who lived there until 1886 and thereafter shifted to Narayanhiti Palace. However, the palace is still used for some ritual and ceremonial events. Hanuman Dokha Palace also serves as a museum that displays an array of documents and artifacts from multiple regimes. The Hanuman Dokha palace is the reminiscence of Royal families, culture, and traditions of Nepal. The Durbar Square’s vicinity is also the best display of Nepalese architecture, history and uncanny juxtaposition of modern and ancient eras co-existing in harmony. 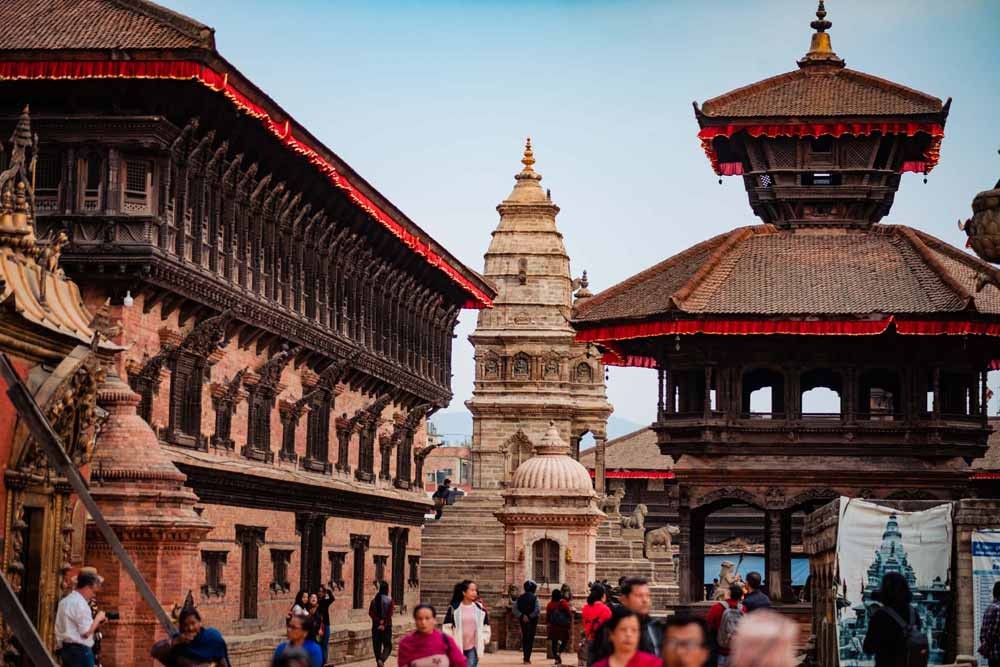 Bhaktapur is located on the eastern side of Kathmandu. It is the most authentic display of distant Nepalese medieval civilization frozen in time. Bhaktapur is regarded as the center for the ancient Nepalese culture, religion and magnificent craftsmanship which can be seen in temples, shrines, and palaces populating the vicinity. Bhaktapur is dominated largely by the Newari populace. The Bhaktapur Durbar square is a complex that consists of four different squares. Lion gate, Golden Gate, Nyatapola Temple, fifty-five windowed palace are some of the many jewels embellishing the vicinity. Bhaktapur Durbar Square is untouched by western influences and one can experience being in distance past frozen in time. 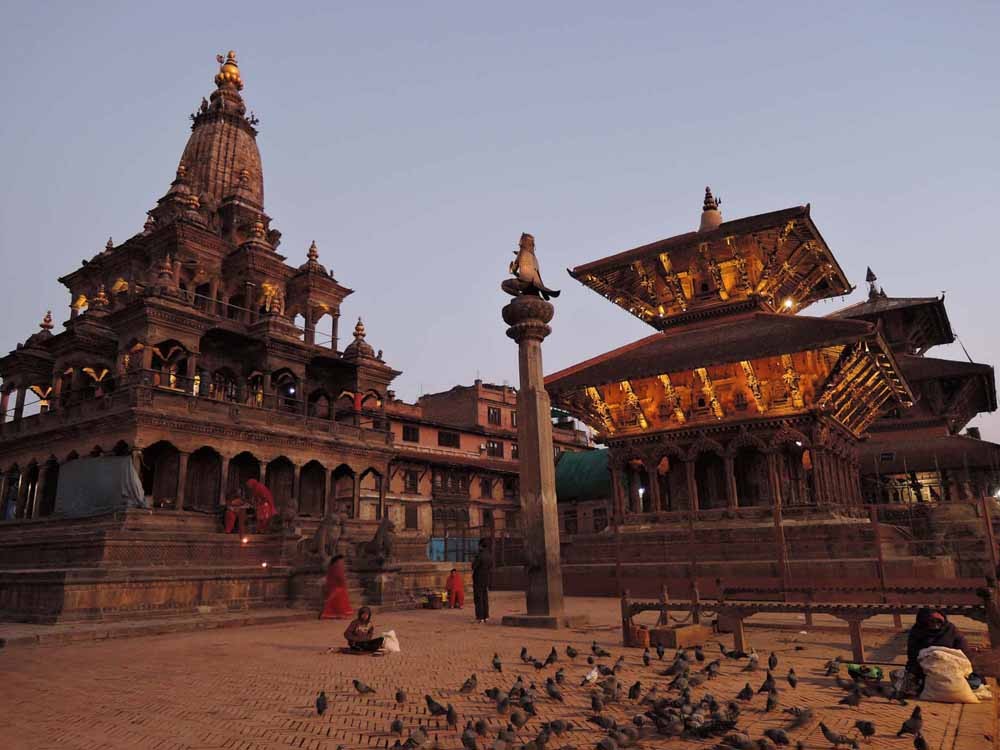 Patan is 5 km from Kathmandu connected by the holy river Bagmati. Patan, nearly 460 hectares of space lies in the district of Lalitpur, bounded by 4 stupas, which is the best display of religious tolerance where both religion- Hinduism and Buddhism thriving in harmony. It is believed that Patan was founded around the 3rd century by the Kirat dynasty. There are many legends surrounding Lalitpur. As per one such legend, ancient Kathmandu was experiencing a severe drought that lasted years, and three people were assigned with the task to summon Red Machhindranath, the god of rain. Among the three, a man named Lalit is considered to have contributed more. After the rain finally poured, in order to acknowledge his contributions, the people of Lalitpur decided to name the area after him. Patan is also called ‘Yala’, a name given to Patan by the natives. In the present day, Patan is an amalgamation of perfectly preserved culture, traditions, heritage, and architecture. Patan Durbar Square, Krishna Temple, Golden Temple, Mulchowk, Jagat Narayan Temple, Pillar of Yogendra Malla, Bhimsen Temple, Vishwanath Temple are some of the treasured jewels and attractions of Patan. 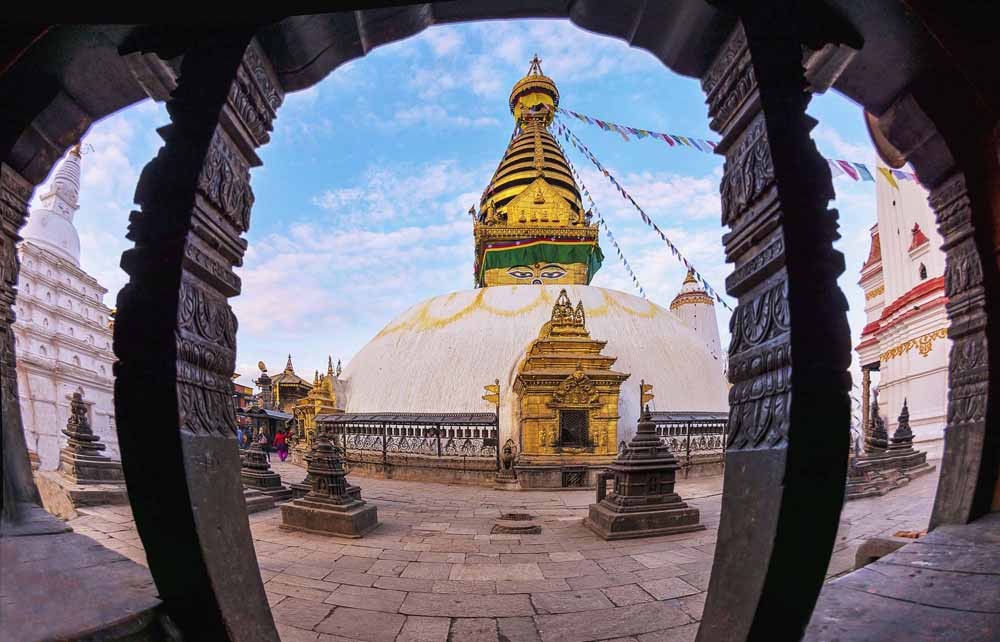 It is located 3km west of Kathmandu. Legend has it, Swayambhunath was an island in ancient times. Later a stupa was built on, some 2500 years ago. The king Manadeva was the major benefactor for the project, providing financial aid and overviewing the project. After the invasion of the Mughals, the stupa was distorted and disfigured and had to undergo renovation in the 14th century. It is believed to be the oldest monuments in Kathmandu. The structure represents the four elements- earth, fire, water, and wind. The 13 rings of the spire represent the 13 steps or ladder leading to Nirvana. To reach the top of the Stupa, one must climb 365 stone steps. The Stupa holds a significance in Buddhism and Buddhists consider the stupa to be the holiest. The site was also the major attraction for the Hippies in the 1970’s coming from Europe and the Americas. The Stupa was enlisted in the UNESCO World Heritage Site in 1979. 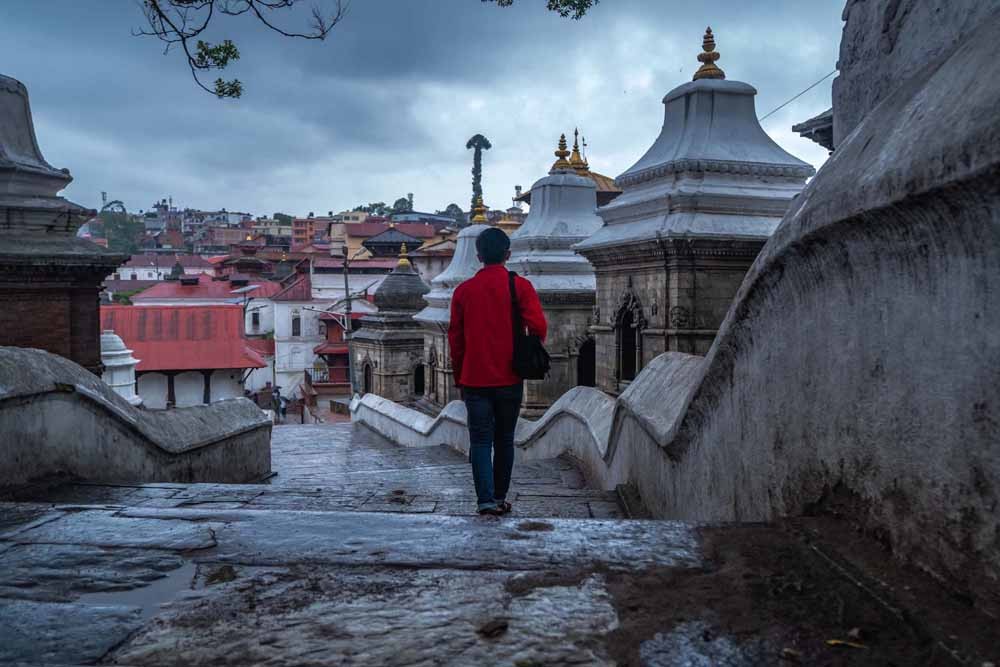 The temple of Pashupati is located on the side of the holiest Bagmati River and is dedicated to Lord Shiva- the destroyer of ignorance and bringer of light. Hindus consider Pashupati to be the most important pilgrimage centers in the world and people from all over the world come to visit. Especially at the time of Maha Shivaratri, millions of pilgrims come from every part of the world and participate in the festival that lasts all day and all night. The temple is believed to have been erected as far back as 400 BC. However, the present-day two-storied structure was erected in the 5th century AD. The temple is built in the Pagoda format and houses a Lingam- an ellipsoid that represents Lord Shiva. The temple’s vicinity has other small 518 structures namely; Ram Temple, Guheswori Temple, Virat Swaroop Temple, Vasukinath Temple, etc. and is adorned with 184 Lingams throughout its perimeter. The main attraction of the Pashupatinath Temple is the open cremation sites, deer forests, Yogis and Sadhus and eastern classical music center. 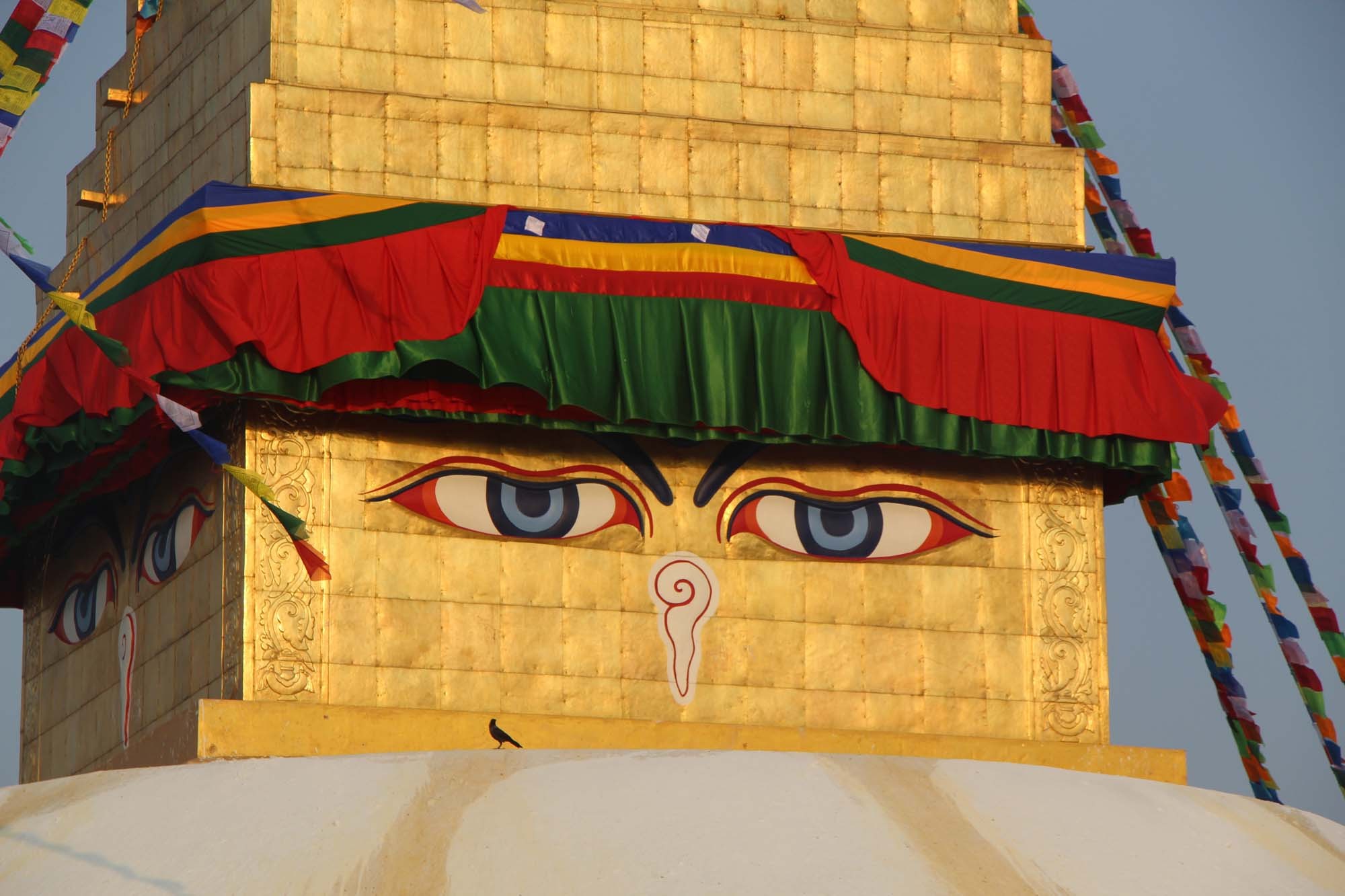 Bouddhanath lies 8 kilometers east of Kathmandu and it was built by the Licchavi King in the 5th century. It is considered to be the biggest stupa ever built and is erected on an octagonal base. It is a very important place of worship for the Tibetan Buddhists. The area is largely Tibetan dominated. Tibetan refugees after forced out of their country resided in this area calling it home, and the influences can be seen in cuisines, cultures, traditions, and architectures adorning the vicinity. The stupa is surrounded by various other temples called ‘Gompas’. The ambiance is peaceful, incense filling the atmosphere with a pleasant smell, prayer flags decorate the sky and chanting of monks, a little oasis in the middle of the city. 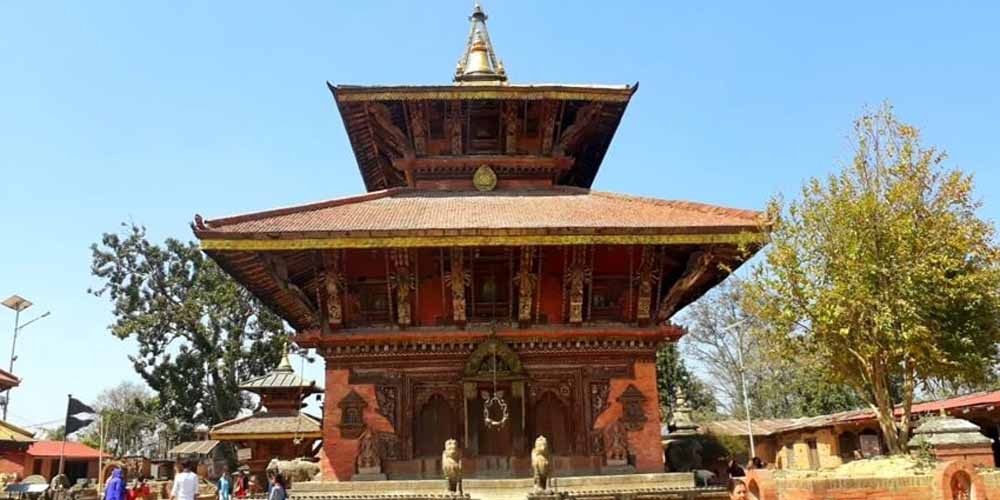 Built on the Pagoda format, this two-tiered temple is a homage for Lord Vishnu. It is located 15 kilometers away from the city of Kathmandu and lies in the ancient city of Bhaktapur. A stone inscription unearthed from the 464 A.D. and other ancient architectural monuments illustrate the ancient history of Nepal. The temple is embellished with sculptures of Vishnu’s ten incarnations, Vishnu Vikranta, Vishnu riding Gadha, Nar-Singha Vishnu and many more. Temples of Kileswar Shiva, Chnnamasta Devi, and other gods and goddesses can also be seen around the perimeter of the temple. 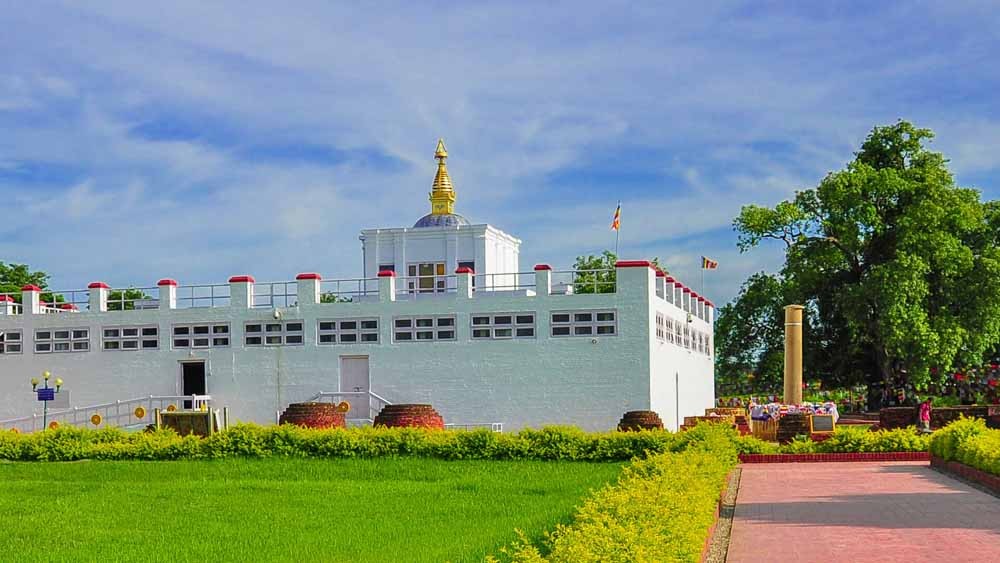 Also known as the birthplace of Lord Buddha, Lumbini is located in the southern Terai plains of Nepal and is about 300 Kilometers from Kathmandu valley. Lumbini is considered to be the holiest in Buddhism and millions of tourists from all over the world come to visit the sacred land each year. In 250 BC, Emperor Ashoka built a large stone pillar that contains inscriptions indicating the birth of Lord Buddha. Lumbini also bears cultural significance as equal to religious and historical importance. Hundreds of monasteries and temples built by nations like; Japan, Myanmar, Thailand, China surrounds the vicinity including Lumbini Garden, Maya Devi Temple, Tara Foundation, World peace Pagoda and many more. There also is a museum and research center for Buddhism. Lumbini is also a great destination for bird watchers as it houses a variety of rare species of birds. Many high-quality accommodations and restaurants can be found in Lumbini. 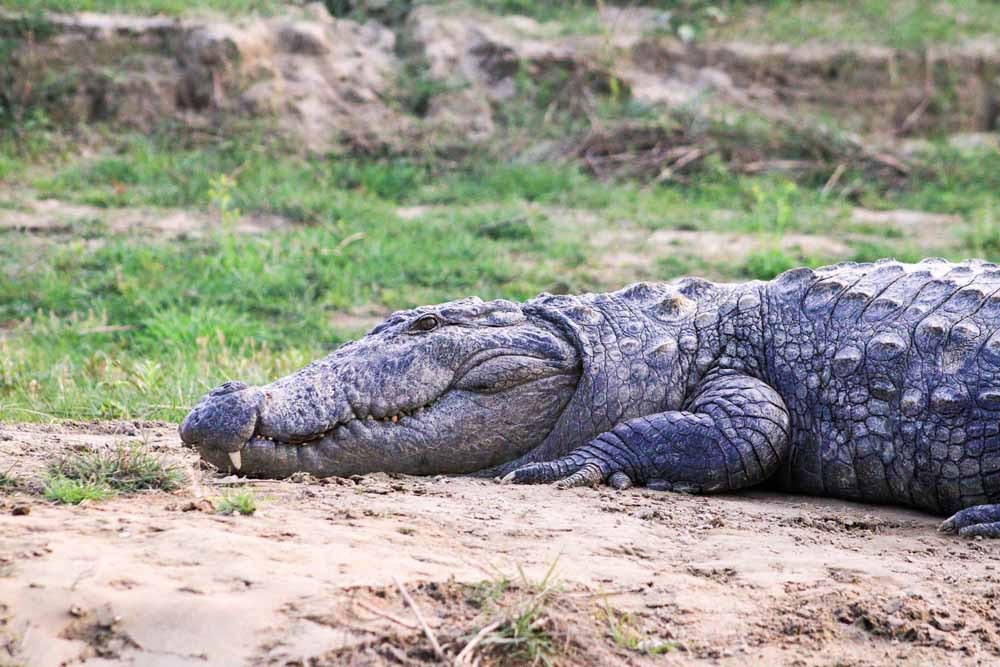 Stretched across 932 sq. kilometers of space, Chitwan National park lies in the inner belt of the Terai region. The park is famous for excursions through jungle safaris and getting up-close with wildlife in their natural habitat. Chitwan National Park offers the rarest species of the eco-system. Canoeing through the Narayani River, one can get up-close with crocodile dominating the river. There are various luxury hotels, restaurants, and resorts for the best possible experience. Cultural tours are also offered and one can witness the unique lifestyles and culture of people residing there. 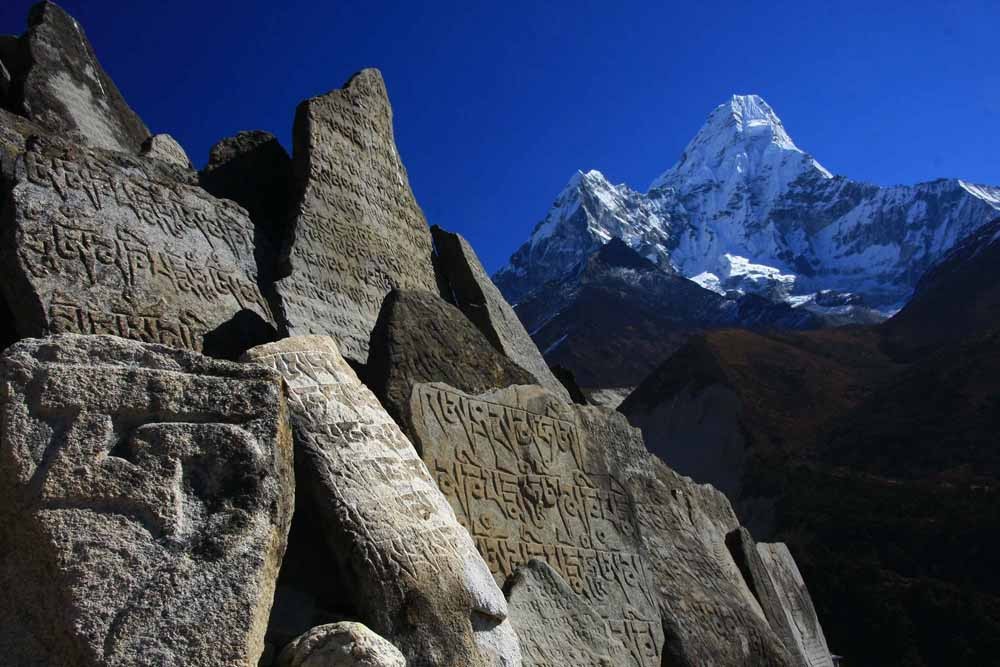 Sagarmatha National Park lies in the majestic Himalayas and covers 1,148 sq. Kilometers of apace. It offers the jaw-dropping views of the mighty mountains, glaciers, valleys, and rivers. The national park is home to an array of exotic fauna and flora. The national park is adorned with plant species like Rhododendron, blue pine, silver fir, etc. and if lucky, may encounter the rarest snow leopard, red pandas, lynx, etc. It is also considered a paradise for bird watchers and many of the rarest and exotic species of birds can be found here like; snow pigeon, snow cock, pheasant and many more.

Also, we offer the best deals and packages for all other mentioned UNESCO world heritage sites in Nepal.
Visit Nepal this year with Shepherd Holidays and witness unstressed and relaxed travel experience. Leave all the planning and worrying to us while you enjoy breathtaking landscapes Nepal has to offer. Amazing travel packages with reasonable prices can be expected. With personalized itinerary tailored as per your needs and preference, traveling has never been so easier. We offer a wide variety of packages including trekking, tour, and many other adventurous activities as per your need. We acknowledge and understand the toll of traveling on nature and therefore encourage all of our staff to practice green tourism. For booking and reservation, you can contact us directly from the website or email us at [email protected]